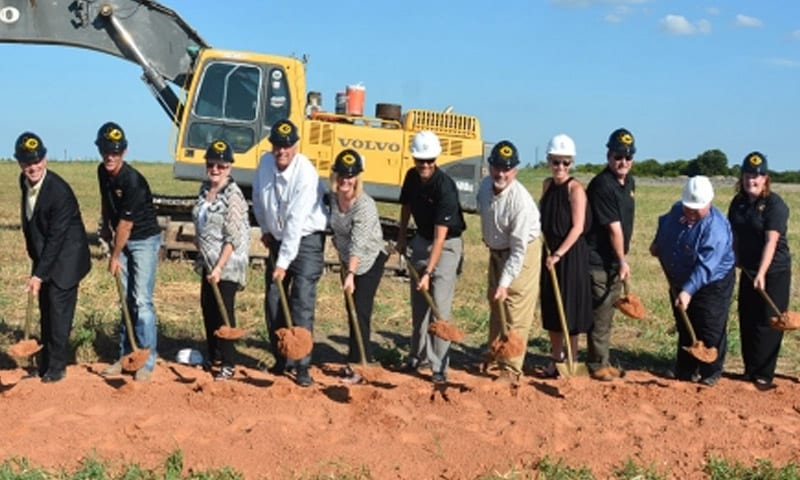 Currently, a rocky, dirt road leads to the site where the new elementary school will be built on what will eventually be an extension of Sunnybrook Drive on the leading edge of the fast-paced development on the south side of the Heartland community.

Past board members and administrators were credited with having the foresight to begin preparations years ago for growth today and partnering with the Heartland community developer in their combined vision to facilitate the education of future Crandall ISD students.

“We want to thank, with all of our hearts and sincerity, previous administration at Crandall ISD for having the forethought to work and form a contract with Huffines and this development and have the foresight to see the needs we were going to have 30 years down the road,” stated Crandall ISD Superintendent Dr. Robert Jolly.

“Its like Christmas time, I love this time of year,” stated Jolly. “We start a new school year, we’ve got kids coming back, new teachers are excited, and now we’ve got a new building.”

“The future is bright in Crandall ISD,” he said.

Construction on the new campus is expected to begin in the coming weeks and open for the 2017-18 school year, according to district spokesperson Erin McCann. The last time the district opened a new campus was Barbara Walker Elementary on the north side of Heartland in 2008.

“I wanted to also say thank you to our past board members who saw fit to make plans for the future so that all students who attend Crandall ISD will have the best possible facilities,” Crandall ISD Board President Robyn Foster said. “I look forward to working with all of you throughout this year and look forward to this time next year, we’ll be standing here, opening the doors, cutting the ribbon, and walking into the new school.”

Jolly says a naming committee has been established and expected to name the new elementary school by December 2016 which is also when the district will begin working on new personnel for the campus.

McCann says the district will begin working with their demographer to determine the campuses boundaries but says there will not be a major impact to current students.

With the addition of the new elementary campus, Crandall ISD will move 6th grade students out of Crandall Middle School and back to their respective elementary campuses in the 2017-18 school year, stated the district.

“We are excited about the growth of our district and would like to thank the Board of Trustees for their support in adding 45 additional positions over the last two years,” stated Jolly in a press release earlier this week. “These positions will be instrumental in serving all children with all needs.”

This article was originally published in InForney.